Gather round, brethren. And bring a bleeding desire to master Hematology. I can imagine the hematologic system advocating for itself, explaining that “without me, what are the heart and lungs really doing? The blood is everything!” All the body’s systems want to do (other than score some dopamine by allowing you to enjoy pizza and watch Netflix) is get oxygenated and deliver oxygen to the tissues that need it. Your blood is there for just that. Carry oxygen to where it needs to go, sustain oxidative phosphorylation, make ATP, and keep you alive.

Yet all of this blood is contained in a plumbing system that sometimes gets compromised, whether by vessel weakening, injury, or surgery. As if we don’t ask enough of our blood with the whole oxygenation rigamarole, we expect it to be a self-sealing medium—able to form a dependable clot where defects exist, but never form it in places we don’t want it. What does the eager medical student absolutely need to know?

We will focus on the very highest-yield aspects of hematology, saving it’s inseparable partner, Oncology, for our next post.

Thrombogenesis (8.5) – Or “forming a clot” for the layman. The intricacies of clot formation are amazing, and even our classic intrinsic/extrinsic pathway teaching models have recently come into question. But they at least give us a general framework that we can refer to, and the paradigm hasn’t shifted away from them yet, so they are what you will be tested on.

The diagrams that we so often use are a bit complicated, so let’s explore them from a distance. 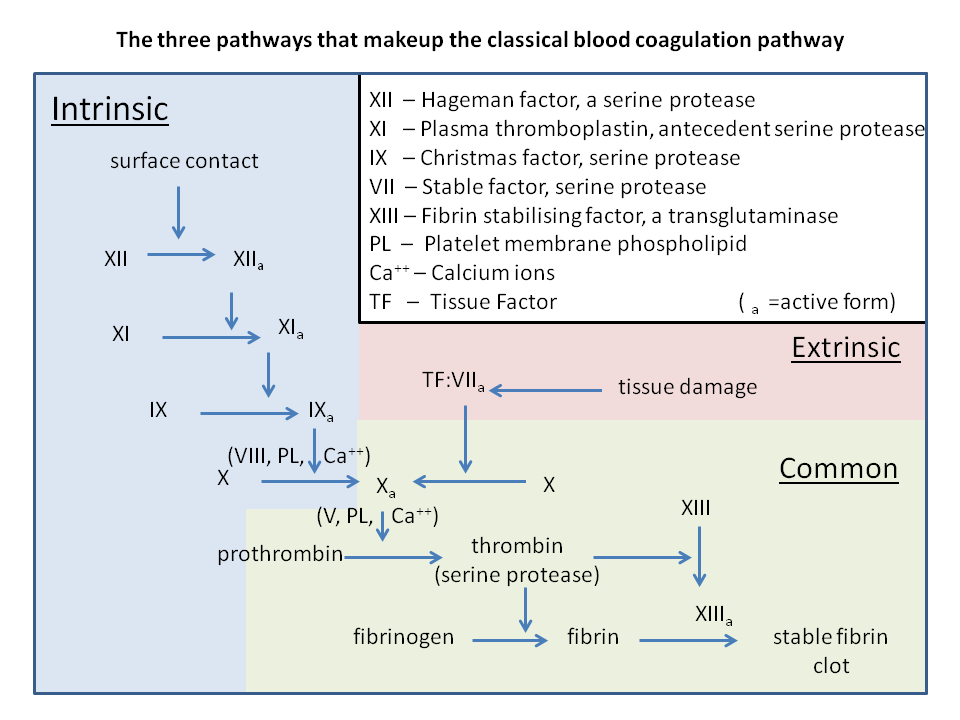 The big picture idea is that multiple systems exist with the same desired end point: forming a stable clot to stop bleeding. This clot is made of cross-linked fibrin. Platelets serve a less permanent but “faster to arrive to the scene” role; finding said hole and sticking themselves therein. While the two have a common goal of hemostasis, platelets and clotting factors/coagulation pathway are two totally separate systems, measured by different laboratory tests, and are afflicted by different disease processes.

The aforementioned common pathway is just another cascade that results in the formation of a stable fibrin clot.

So now we know how a clot forms. How does it break up (other than by picking a scab). Our bodies have a natural anticoagulation system to keep coagulation in check. The most important protein here is plasmin, whose job is to break up fibrin clots. It’s activity can be upregulated by a tissue plasminogen activator (tPA), like alteplase.

Often times, we want to take control of the body’s factor system with the intention of “thinning,” or anticoagulating the blood. These medications are used when we want patient’s to be further away from the verge of forming blood clots. Circumstances include patients with mechanical heart valves, those with atrial fibrillation, or those that have a hypercoagulable baseline from a disease like lupus or cancer.

Put on your heparin HAAT, as Heparin Activates Antithrombin 3, thereby pushing things towards fibrinolysis and away from coagulation. It’s activity is measured with PTT. It’s use is more-or-less limited to inpatients.

Coumadin inhibits the vitamin K-dependent clotting factors II, VII, IX, and X. Its activity is measured by PT/INR, and it is more of an outpatient medication to keep the blood thin.

Revisiting the figure above, we notice that thrombin is the protein responsible for turning fibrinogen into fibrin, and fibrin = clot. If we use a thrombin inhibitor (like argatroban), it will be harder to form clots.

Also from the figure, remember that Factor Xa is the first mediator of the common pathway. Factor Xa inhibitors put ban on factor xa, and end in the suffix –xaban.

Anemias (10) – You will be tested on multiple forms of anemia. The name of the game here is to have an algorithmic approach to diagnosis. First off, anemia means a low red blood cell count; there are not enough of those oxygen carrying powerhouses floating around your plasma.

General symptoms include tachycardia, as the heart tries to increase cardiac output to maintain oxygen delivery, pallor, and lightheadedness (less oxygen in the brain).

When it comes to diagnosis:

Qualify the anemia based upon red cell size.

If your cells are macrocytic (large; MCV > 100), you are likely dealing with a Vitamin B12 or Folate deficiency. Nice, short differential.

If your cells are microcytic (small; MCV < 80), you’ve narrowed it down to iron deficiency, lead, chronic disease, or a thalassemia.

Iron deficiency is usually caused from bleeding or an absorption/malnourishment problem.

Thalessemia is a problem with either the 𝝰 or 𝞫 chain of hemoglobin. Since it’s a congenital disease; the hemoglobin has a hard time forming from birth.

For lead poisoning, look for other sequelae (abdominal pain, neurologic issues, or lead lines) and risk factors, whether occupational (“I work at the lead mine!”) or children eating the paint in an old house.

Anemia of chronic disease can only exist if the patient has a chronic disease, like lupus, cancer, HIV, or any multi-system immunologic problem. Inflammation is to blame.

If your cells are normocytic (normal sized, 80 < MCV < 100), culprits include chronic kidney disease (↓EPO), anemia of chronic disease (again), or some hemolytic process. Breaking down blood cells shouldn’t change the size of the survivors.

Hemolytic diseases are numerous! Hemolysis, the destruction of red blood cells, can occur from infections, can be autoimmune, or result from the spleen destroying disfigured red blood cells, like those in spherocytosis or sickle cell disease.

By no means exhaustive, but undoubtedly high-yield. Up next… oncology!